This article was written by Bronwyn Weatherby for The National. Published Thursday, January 20th, 2022. To access the original article, click here.

The number of people waiting for hospital treatment in Wales has ballooned for the 19th consecutive month, prompting calls for the Welsh Government to act now to tackle the “colossal” backlog.

There were 682,279 people waiting for non-urgent care in November, which is the highest number on record and over 14,000 more than in September.

A Government spokesperson said it had been a “hugely difficult winter” and the focus is on supporting urgent and emergency care services.

They admitted the figures for December, due to be published next month, will likely be worse again due to the impact of the Omicron variant and the pausing of elective surgeries prior to Christmas to allow health boards to focus on the coronavirus booster jab rollout.

A total of 241,667 patients have been waiting more than nine months for treatment, which is a slight decrease of 434 on the previous month.

The largest number of patients waiting is the 97,422 listed for trauma and orthopaedic surgery, while 84,447 are waiting for general surgery, 57,224 for ear, nose and throat treatment, and 40,809 for urology.

The Royal College of Surgeons has called for the urgent rollout of Covid-light surgical hubs to tackle the backlog.

Susan Hill, a consultant vascular surgeon in Cardiff and the college’s director for Wales, said: “Throughout the pandemic, patients in Wales have shown formidable patience and understanding as their planned operations have been either cancelled or postponed. The figures published today show the colossal scale of the backlog in Wales.

“It is important to remember that these huge numbers represent individual people waiting in pain and distress.

“We need to start planning for the recovery of surgical services in Wales to reassure patients they will receive their treatment.

“The Welsh Government must develop, as a matter of urgency, a clear, strategic plan outlining how it will introduce the rollout of Covid-light surgical hubs across Wales.”

However, on Wednesday health minister Eluned Morgan told colleagues during a Senedd committee hearing that plans to reduce NHS waiting lists will likely be delayed until the spring due to the ongoing pandemic.

In the waiting times figures, additional data shows a third of patients had to wait over the four-hour target to be seen in A&E last month.

He said: “Today’s figures show that there is no letting up on the pressure bearing down on the NHS. While our medical staff work around the clock, doing their best, they are still not being equipped to see patients in timely manner, despite Labour having over 20 years to do so.

“We know that Covid is now not causing mass hospitalisations and deaths, but is harming public services – as well as private businesses – through isolation requirements, leading to staff shortages.

“Eventually, Labour ministers will have to exit their current tunnel vision as such restrictions do more harm than good.” 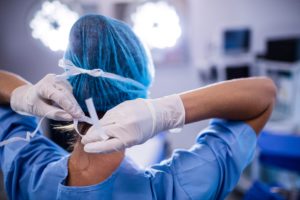